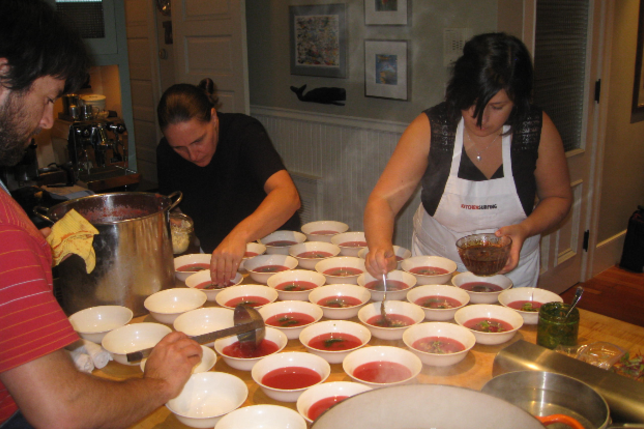 About Sinead and Sirona

A Bay Area native, Sirona spent three years in New York City where she became a pasta expert (in charge of production at Danny Meyer’s Maialino Restaurant), an accomplished private chef to clients from Park Ave to Brooklyn and a Party Chef at Union Square Events, Meyer’s private events company. Formerly Sous Chef at Oakland’s BayWolf Restaurant, Sirona also worked the wood oven & open hearth at Camino. She grew up exposed to peak local ingredients and landmark CA restaurants. She spent every Saturday of childhood glued to the TV screen for PBS cooking shows and to her Grandma’s side as she scratch cooked in her small apartment kitchen. Sirona’s food reflects the sophistication of years in fine restaurant kitchens yet retains undertones of Grandma “Tex’s” home cooking.

Sinead was born in Ireland and raised both there and in California. She honed her natural gift for hospitality in the front of house at fine dining restaurants including Baywolf, Maialino, Fatty Cue and The Grocery. Sinead’s knack for making guests feel welcomed and relaxed is thanks to the gift handed down from Irish heritage and her genuinely warm personality.

Now married, Sinead and Sirona met 15 years ago and have been nurturing a mutual passion for food, beverage and hospitality ever since. Their East Bay pop-up dinners have become nothing short of legendary. As an SF Bay Area private dining duo, Sinead and Sirona love to create unique in-home culinary experiences. Together they offer seasonal, flavorful cooking infused with warm, seamless hospitality.

S&S Foods is Sinead and Sirona, a married front and back of the house private dining partnership based in the East Bay Area, CA. Sinead specializes in warm, seamless hospitality while Sirona chefs. Our events require the contents of an average home kitchen to complete. We bring the elevated restaurant experience to your private home. S&S Foods serves the greater Bay Area from Monterey/Santa Cruz to Napa/Sonoma.

To book us for an in-home dining experience please send your location, date, time, party size, any dietary restrictions and a brief description of your event to contact@sandsfoods.net. We will reply with our availability and a custom tailored menu and event proposal.